My name is Giuliano Iurilli and I have been a PhD student in Neuroscience and Robotics at IIT-Genova from 2008 to 2012.

I worked in Paolo Medini’s lab at the Department of Neuroscience and Neurotechnologies. We investigated the computations performed by the visual cortex and how such computations develop while the neural network transitions from an immature to a mature stage. We used the visual cortex of mice as our experimental model which allowed us to use the most advanced and powerful techniques for monitoring the neural activity of population of neurons at the cellular level. At that time, we were among the few labs in the world that could get such detailed informations from the brain and still today IIT is the only place in Italy where this is possible. 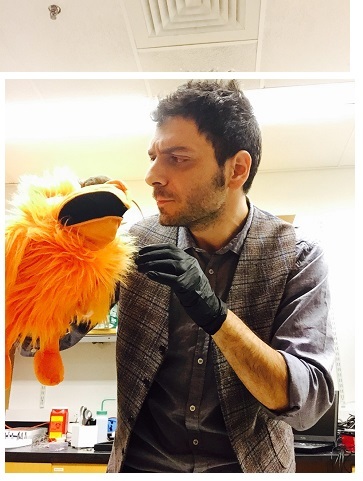 At the end of my PhD, IIT funded me as a visiting scientist in the Department of Neurobiology at Harvard Medical School. The impact with Harvard blew my mind and after a few months I decided that I wanted to stay in Boston for a few more years. So I applied for a grant from the Human Frontiers Science Program, I won it and I joined the lab of Bob Datta at Harvard as a postdoctoral researcher. Here we investigate how the brain organizes the statistics of innate behavior. We focus on olfactory-driven behavior because olfaction is the primordial sense used by all animals to explore the world. To this aim, we have developed new machine vision, machine learning and optical and electrophysiological tools to parse the continuous behavioral flow in its re-usable syllables and observe how the brain encodes sequences of syllables.

After six years at Harvard, I am now ready to come back to IIT. In December 2017 I was awarded the Armenise-Harvard Career Development Award, a one-million dollars grant that will allow me to start my new lab at the Center for Neuroscience and Cognitive Sciences in Rovereto in 2019. I can’t wait to start this new exciting adventure with my mother-ship. IIT invested in me, I invested in IIT. Let’s keep it rolling!

At IIT I made my first scientific discovery, the one that you exactly remember what time it happened and which clothes you were wearing. It was 10 pm of a Friday and I had been recording the responses of neurons to visual stimuli from the visual cortex of a mouse for about five hours. I was getting bored and was ready to go home. So just for fun I started clapping my hands (jeez, I was so tired!) a few times and I noticed that every time that I made a sound the visual neuron responded. That was not supposed to happen. Sounds are processes by auditory area and images are processed by visual areas. At least according to the textbooks. I literally felt hazy for a few minutes. I repeated the observation in other neurons and in more controlled conditions.  It was all true. I grabbed my phone and called my boss “Hey Paolo, the gods went crazy tonight…”. In the next months, we described the synaptic mechanism of multi sensory integration in primary sensory areas (1) breaking a dogma in neuroscience. Today, this notion is still slowly getting in the textbooks, but it has been confirmed and generally accepted by the scientific community as an early brain computation for building our experience of objects. I hope that in the next years all my students at IIT-Rovereto will have the same amazing experience that I had that night.

Would you like to contribute with your story too?