[Full video of the award ceermony and interview with Riccardo below!]

The Eppendorf & Science Prize for Neurobiology (Science Eppendorf Group) acknowledges the increasingly active and important role of neurobiology in advancing our understanding of the functioning of the brain and the nervous system.

We are very proud to announce that one of the Finalists of the Eppendorf & Science Prize 2020 for Neurobiology is Riccardo Beltramo, IIT alumnus, ex PhD student at the "Optical Approaches to Brain Function" Lab in IIT, with his paper titled "A New Primary Visual Cortex". 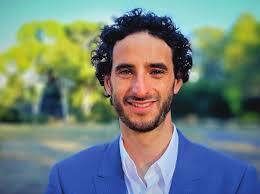 We took this chance to ask him a few questions.

Your paper in few words.

My current research focuses on the neural pathways that carry visual inputs from the retina to the brain. In mammals, two distinct systems process visual information: the “visual cortex” and the “superior colliculus”. The visual cortex is the portion of the cerebral cortex that processes visual input and is one of the best-characterized areas of the brain. According to the classical models, visual information reaches the cortex at the level of the “primary visual cortex”, also called V1. V1 extracts basic features of the visual world and relays information to higher visual cortices. These cortical regions are defined as “higher” because their responses are believed to depend on V1 activity. However, in contrast with this hierarchical model, I discovered that one of these so-called “higher” visual areas, the postrhinal cortex (POR), does not rely on V1: I found that after silencing V1, the visual responses of POR were still intact. If not from V1, then how does POR get visual input? We discovered that POR receives visual information from an evolutionarily ancient midbrain center called “superior colliculus”. The superior colliculus is the main visual processor of many vertebrates, like fish, reptiles, and birds. Our finding breaks a long-standing dogma, showing the existence of a novel primary visual cortex, independent of V1 and dedicated to the superior colliculus (Beltramo & Scanziani, Science, 2019; Beltramo, Science, 2020).

What are the implications for evolutionary studies?

When we look at the mammalian brain and compare it to the ones of phylogenetically older vertebrates, the first difference that we notice is the presence of the cerebral cortex. Throughout millions of years of evolution, the cerebral cortex increased its size, becoming one of the distinctive features of the mammalian brain. Over time, the cerebral cortex began to accomplish functions previously performed by more ancient brain areas. However, this more recent structure did not just replace the older ones but rather integrated with them, increasing the circuit complexity. A critical question in evolutionary studies is understanding the roles played by ancient and modern, coexisting, and functionally similar brain regions. Mammals have two coexisting visual systems: the ancestral “superior colliculus” and the modern “visual cortex”. Our finding of an area, POR, placed at the interface between these two visual systems, provides us with a unique model to study the interactions and the roles of the ancient and modern neural pathways in visual information processing.

What is a fond memory you hold about IIT?

My best memories at IIT relate to the time spent with my Ph.D. advisor, Tommaso Fellin, while we were setting up his new laboratory. Back in the day, Tommaso was a new team leader who just started his IIT career after a postdoc in the United States. I was his first Ph.D. student and, in the beginning, it was basically just the two of us, in a very small room at the NBT, with limited resources. Despite that, we managed to pull off great studies together, mostly because of the time he spent training me and teaching me the secrets of electrophysiology and optogenetics. I really enjoyed my Ph.D. years at IIT. I learned a lot, and there I met people who became some of my best friends.

Keep going Riccardo, and congratulations for your results!