Where did Wristbot start from?

“The real starting point of this business idea sprang from the scientific research we were conducting in our lab. We were studying motor learning processes and robotic rehabilitation with the ambition of designing robots that could help patients with neurological problems during the rehabilitation of their upper limbs” Jacopo Zenzeri immediately replies.

“We focus on how to help them gain a better life quality. To do so, allowing these people to re-gain control of their arms is paramount, both from a practical and a psychological standpoint. So we studied how paresis could be robotically treated and we came up with a tool specifically designed to facilitate wrist and forearm motion recovery.”

Jacopo keeps on explaining how research shows that helping rehabilitate the distal part, neurologically produces beneficial effects to the proximal part as well.

The patient that uses Wristbot for his/her rehabilitation, as in a videogame, clutch the device handle and is then guided through a series of exercises with the help of a virtual reality environment. Each exercise is a sort of a game that the patient needs to complete, while Wristbot is releasing alternatively contrasting or helping forces in a way that facilitates the recovery in a smart and tailored way. 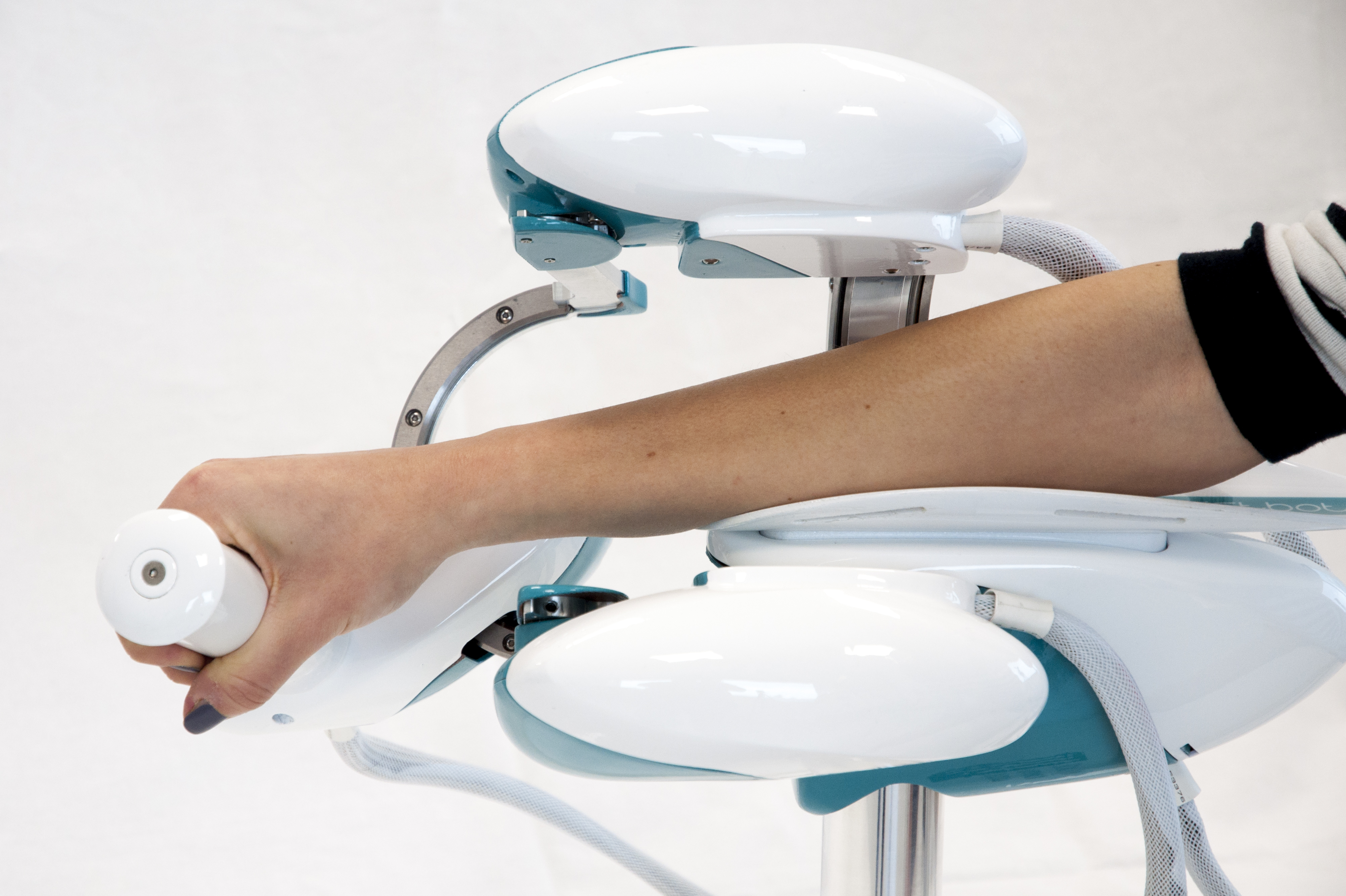 “All was made here in IIT” Jacopo adds, “everything from the mechanical to the electronic part and the software that runs it. We simply used IIT facilities such as the electronic facility or the mechanic one to seek for help by other IIT researchers.”

Team Wristbot then, after a series of successful clinical trials and a thorough market research, was convinced that the device they envisioned and was now a prototype could really be useful and successful on the market.

“We also have several joint lab within health structures where we have been able to test our product on real patients. In order to sell it to these structures or other clinics, though, it needs a medical certification” Maddalena Mugnosso adds.

“One of the main difficulties was to actually understand who was part of the team and who was not. The rationale behind selecting the group has been to check who was interested in embarking in such an adventure and who was already part of the lab. We are now a structured team of four people.”

The team is composed by Jacopo Zenzeri and Francesca Marini, who constitute the scientific advisory part of the team and Amel Cherif and Maddalena Mugnosso, who are going to be the more business involved wing of the team and that, in fact, are the ones who took part into the High-Tech Entrepreneurship Program in 2019.

“Our strategy in these years was based on marketing testing. So we created a well-engineered prototype and given it to six of our academic partners who are in Canada, US and Singapore. We collaborated with them to analyse the product and its faults and we treated them as actual clients, learning a lot about customer handling as well.
This approach was helpful for a variety of reasons, such as collecting feedbacks, make the product more competitive and adopt a more flexible mindset while considering all different suggestions coming from these technological partners and that derived from different needs coming from actual patients.”

It all began five years ago. There was already a prototype developed in the lab only for scientific purposes but was not the focus of anybody’s research in terms of moving towards a medical product, until Jacopo and others decided to begin a more intense engineering of it.

During the last year, the team sought an opinion from the IIT Technological Transfer Office as well, in order to gain a better insight on how to move their next steps toward the market. As a result, two Wristbot teammates took part in last year HTE (High Tech Entrepreneurship) to strengthen the team business vision and they won it as best project submitted.

Now the team looks ahead to marketing the product within the next couple of years.