On January 24, 2019 a paper published in Science DAily revealed that researchers from the Italian Institute of Technology successfully created the first robot that mimics the vine-like tendrils of plants.
Researchers say the robot has the ability to both curl and climb on and aroun various objects by making use of the same physical principles that aid the transport of water in vines and plants.
Thanks to this new technology, wearable devices that can curl and move, such as soft braces that can morph their shape, may someday be available.

The Italian, soft-bodied robot works by wrapping itself around objects and maneuvering itself to climb higher with the same physical principles that propel vines upward as they grow. The similarities between the new robot and an actual vine are both internal and external.

The hydraulic principle of osmosis, which transports water inside a plant, is the what allows a vine to climb as it grows. Movement of water through a plant's tissue is dependent on the distribution of tiny particlesthroughout the liquid inside plant cells, known as the cytosol. 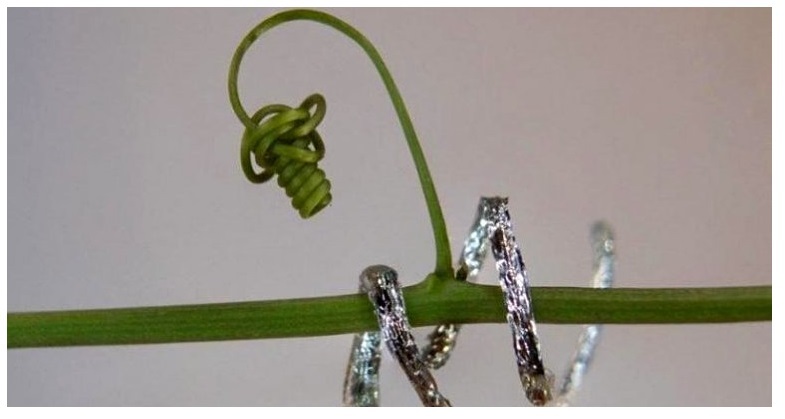 Osmosis here refers to the movement of soluble particles across a semipermeable membrane from regions of lower to higher concentration.
Using mathematical models that analyze the aforementioned quality of plants, the researchers replicated the natural system of a vine while speeding up the mechanism of movement to make it a truly intense creation.
The outsideof the robot is composed of a flexible PET tube. Inside that noodle-like body the researchers injected a solution of electrically charged particles. Flexible electrodes powered by battery installed at the bottom of the tendril attract and trap the ions to make the superpowered version of a vine in robot-form.

As the charged particles move, the robot stiffens and relaxes, this creating movement. If the battery is turned off, the movement of the vine-like robot can be reversed.
Believe it or not, this isn't the first time people have tried to create robots that can resemble tendrils.
Almost two years ago, researchers tried to create a vine-like robot that could peek through rubble to serach for victims in the event of an earthquake, building collapse, or horrific auto accident.
Technology can be a lot of things, and in the future, apparently robots will not necessarily have to be solid.

If a vine-like robot sounds unsettling to you, you're likely not alone. The mere thought of a robot able to move in this way evokes images from the scariest of sci-fi and alien flicks. While this technology could certainly be used with nefarious intent, it may prove useful in dangerous situations where humans can't quite maneuver as impressively. And in the spirit of avoiding nightmares, we suggest you focus on the positive uses.
https://www.activistpost.com/2019/01/worlds-first-vine-like-robot-can-climb-and-curl-like-an-octopus.html

WeDraw: A new multi-sensory teaching method for math and geometry by using dance and music

Feb 19 From the Press — Latest from IIT — Lifetech

The President of the European Research Council visits IIT