Panzeri and Fellin on Neuron, within the framework of the Human Brain Project, the Brain Initiative, and of the frontiers research programme of the European Research Council (ERC)

By combining a new innovative mathematical procedure with the careful study of behavior and new frontline optical technology, the researchers at IIT- Istituto Italiano di Tecnologia identified a way to “crack” the code used by the brain to process the information coming from the senses and use it to interact with the world. That is, they managed to develop all the tools needed to understand what is the “language” that neurons use to exchange the information about the external world coming through the senses and to then take appropriate actions about it.

This study was just published in the prestigious scientific journal Neuron, and was led by Stefano Panzeri, coordinator of the Center for Neuroscience and Cognitive Systems and director of the Neural Computation laboratory of the IIT, and by Tommaso Fellin, director of the Optical Approaches to Brain Function Laboratory of the IIT, together with an interdisciplinary team of scientists that includes other prestigious institutions such as Harvard Medical School (Boston, USA)  and University College London (UK).

This research puts forward a new strategy to resolve one of the main unanswered questions of neuroscience: how the information coming from the external worlds is encoded and processed within brain circuits, and how this information is then used to determine the decisions we made in response to this information. 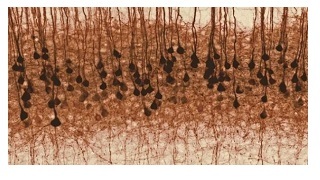 The group of researchers that performed this study takes part in the two largest research international projects on brain sciences, namely the Human Brain Project in Europe, that aims to build a mathematical model of how the brain works, and the Brain Initiative in the USA, that promotes the development of new technologies to understand the mechanisms by which the brain works. Tommaso Fellin, moreover, is the recipient of a prestigious award from European Research Council (ERC) that supports his research into developing new technologies that allow the writing of information on the brain tissue using optogenetics (a technique that combines optics with genetics).

Panzeri and Fellin have thus brought together the perspectives of such an international research community to focus onto a single and highly topical problem, that of how the sensory systems of our brain work.

As a first step, the researchers invented a new mathematical procedure for the analysis of the activity of the neurons in the brain that identifies the electrical codes that the cells in the brain use to represent the stimuli coming from the senses. They then applied this mathematical theory to understand how the information these neural codes was used to take appropriate actions in response to the sensory stimulus, such as get away from a danger or get closer to a source of food. Once they understood how to identify the neural code, the researchers also developed an approach that creates a three-dimensional light pattern, an holographic printout of the sensory information in the brain, that once projected onto the brain tissue can “write down” the neural activity appropriate to elicit a desired sensation.

The researchers finally addressed how to use optogenetic techniques, that use genetics to introduce light-sensitive “on and off” switches in the brain cells, to use the holograms to stimulate the neurons in sensory areas of the brain and so switch on and off the neurons in the appropriate manner to generate a sensation.

This research has implications for understanding the causes of neurodegenerative diseases, such as the Alzheimer disease, Autism and Schizophrenia. The ability of this research to understand how to write directly sensory information into the neural tissue also has implications for the development of brain machine interfaces, devices design to interact with the brain and restore sensory function and perception in patients in which, due to damage or illness, their cerebral cortex cannot receive information directly from the sensory organs anymore.